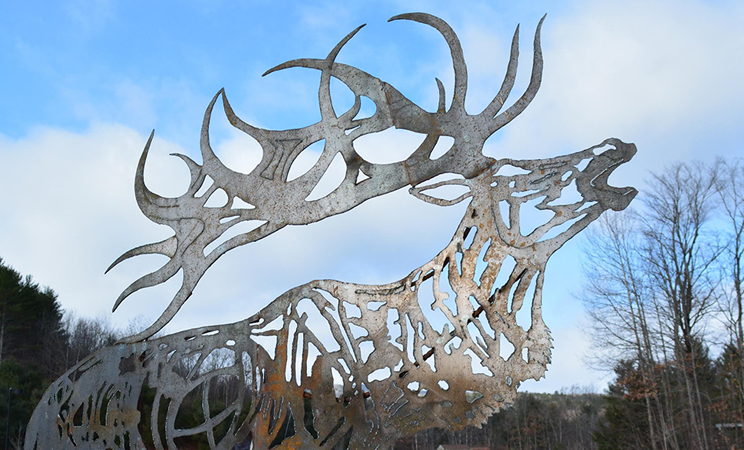 Go back in time with us to the end of the Pleistocene epoch, 13,000 years ago, when glaciers covered North America. Discover what changes were taking place in the environment and why some animals survived while others, like masto-dons and sabre toothed-lions did not.

Science Talk: Jeffrey Kerby, is a Visiting Arctic Fellow at Dartmouth College. His research touches on elements of community, landscape, and behavioral ecology, and has recently focused on gelada monkeys and large Arctic herbivores. He is interested in how life history traits mediate species interactions, particularly in highly seasonal and rapidly changing environments of the Arctic and alpine regions of Africa.

Artist Walk: The contributing artists, Bob Shannahan and Wendy Klemperer will take us along the lighted pathway through the meadow to examine the Ice Age Mammals up close. We’ll explore the types of adaptations they used to survive the snow and ice-covered world just 13,000 years ago and learn about their processes in researching and building the life-sized sculptures.

Following the walk, warm up with some refreshments and cocoa!

Shadow Migration exhibits animal silhouettes cut from steel plates and installed throughout four locations in Summit, NJ. Klemperer investigates animal populations that were threatened in the 20th century, but are now rebounding and showing up in “our backyard.” Wild animals are finding their way into suburban and urban environments even as human populations sprawl into their natural habitats. While many species populations have been destroyed, some are adapting and thriving on the largesse of urban and suburban life. Hawks dive from high rise cornices to feast on the rich urban population of pigeons and rats; bears walk through New Jersey neighborhoods; and coyotes are turning up many boroughs of NYC.

Klemperer’s animal silhouettes are shadows, essences of their worldly form that appear fleeting and at times fleeing. Migration is inherent to both humans and animals, as natural and manmade changes force movement to more hospitable regions. The steel forms are punctuated with cutouts in the shape of countries from around the world. Each animal is a melting pot, bearing countries on its body that are also represented in the US population, a country that has been and continues to be built on immigrants. The nations represented are also a record of where that animal once thrived, or, at times, where they are most threatened. Shadow Migration invites contemplation of nature in an urban setting and of the circumstances of natural diversity in a modern world.

The silhouettes in this exhibition are based on three-dimensional sculptures made from salvaged steel that Klemperer exhibits, some of them permanent, throughout the United States.

The pieces now sited at four locations in Summit ( two quadrants at the Summit train station, Elm Park, and downtown) were originally exhibited at Court Square Park, Queens, NY, thanks to a generous grant from the Clare Weiss Emerging Artist Award and NYC Parks.

The Ram, installed on the campus of Farmingdale State College. The piece was commissioned by the class of 2014 as their gift to the University. I worked on the sculpture through out the fall at my NH studio, then transported it to Long Island in early December. Maintenance workers had gathered boulders from across the campus to build a rocky outcropping according to my plans as a site for the sculpture, and together we completed the installation on a snowy December day.

Permanent installation in front of the student union building

Ram in snow at SUNY Farmingdale

Me in the bucket, welding horns

Me in the bucket, welding during Ram installation

Working at night in NH….

Welding at night in NH studio

“Neither snow, nor rain, nor heat nor gloom of night…”

Ram in Progress in NH after snowfall…

Ram sculpture after snowfall in NH, close to completion.

Ready to get started…..

Raw materials, ready to get started

A good collection to get started with! In my travels in Maine I fortunately passed a construction site piled high with thick, large old rebar from a demolished bridge, and was able to collect a couple tons for the Ram commission.

Osprey Landing installation in progress, I’m in the bucket with another welder from the construction company

More information on Osprey Landing can be found at the Martin’s Point Bridge Replacement Project website.

View article and photo of Osprey Landing in Portland Newspaper, The Forecaster.

While visiting my parents during the Christmas/New Years/Polar Vortex festivities, I took some photos of Catattack,(2007, steel) installed on their front lawn in Watertown, MA

I have a piece in a show of ten outdoor sculptures in Tuscawilla Park, Ocala, FL.

Loading up Running Black for transport to FL from NH studio

Loading up Running Black for transport to FL from NH studio

Inspired from my two week stay as Artist in Residence at Denali National Park, where I had the opportunity to encounter grizzlies near and far.

I’m pleased to be invited by Susan Griswold to make a sculpture at the new St Johns Sculpture Park in Portland Oregon. I’ll be there from August 24-September 9th, 2013 making a piece on site.